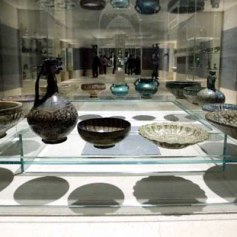 The Egyptian president, along with some Egyptian government officials and foreign diplomats in Egypt from multiple European countries, the UAE and the USA have reopened today the museum of Islamic art in the capital city, Cairo. The museum was renovated by the Egyptian government supported by the United Arab Emirates, Italy, Switzerland, Germany, the USA, and the UNESCO after it was attacked 3 years ago by the so-called “muslim” brotherhood (an illegal, radical, and fascist extremist group which has been eliminated from Egypt since the 30th of June revolution of 2013). The museum is now open to the public and anyone visiting the Pharaoh’s capital of Cairo …  this comes in light of the Pharaoh’s strong stance, along with their global partners, against all criminals with radical ideologies.

The museum showcases in a set of 25 galleries with some 4400 artefacts the Egyptian Islamic heritage since the Arabian conquest of Egypt. The museum holds multiple items regarding the history of arts and science in the early Islamic era, dating back to centuries ago and to the Arabian conquest of Egypt from the Romans. Some of the items on display include ancient holy-book scriptures from the 9th century, ancient musical instruments, early Islamic designs of  lanterns and metal/ceramic/glass pots, in addition to Islamic mosaic art portraits.

Make sure to spend some quality time skimming through this museum when visiting Cairo, Egypt … for some history and beautiful art! 🙂