video 📽️☀️⏳🇪🇬 Egypt across the ages, a quick tour from the cradle of civilisations and ancient kingdoms to the modern kingdom and current republic

Egypt sarchophag Opening of the Coffins of the Mummies found at the Saqqara Necropolis (source: NBC News)

Egyptologists Open the Coffins of Mummies at Saqqara (source: The National) 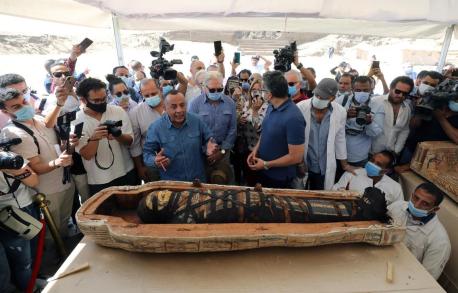 Egyptologists Open the Coffins of Mummies at Saqqara (source: The National) 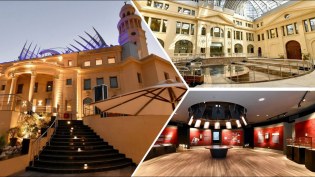 The Egyptian Museum of the Revolutionary Command Council hosted at a beautiful Palace on the river Nile in Cairo, Egypt 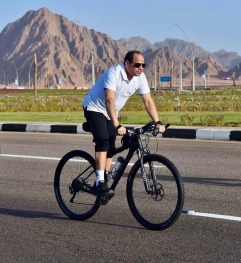 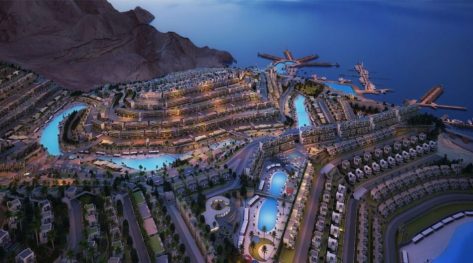 The capital of Egypt, Cairo, sky-view 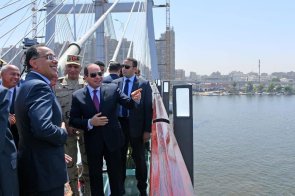 Egypt’s President Elsisi kissing a baby among his greeters during Christmas mass at the Nativity of Christ Coptic Orthodox Church at the New Administrative Capital near Cairo (source: Al-Ahram) 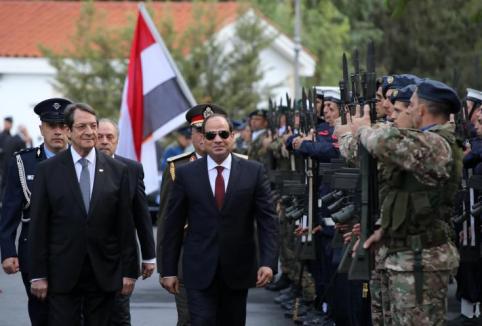 Official welcome of the President El-Sisi of Egypt to Cyprus by president Anastasiades and the military in Nicosia, Cyprus 2017 (source: Cyprus Daily)

The presidents of Cyprus, Greece and Egypt during Tripartite Summit in Nicosia, 2017 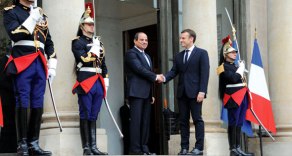 Egypt;s president El-Sisi is received by his French counterpart president Macron at the Elysee palace in Paris, France (source: Al-Ahram) 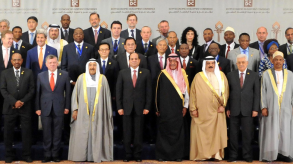 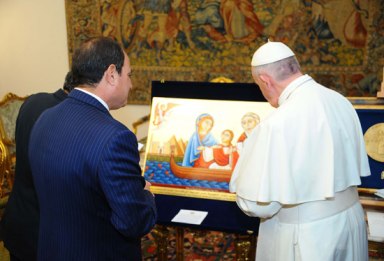 President El-Sisi delivers a gift to the pope of the Vatican, pope Francis, consisting of a picture showing the sacred family’s journey in Egypt.

President El-Sisi of Egypt with Crown Prince Al-Nahyan from the UAE in Abu Dhabi (source: Youm7) 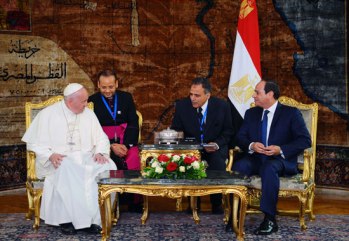 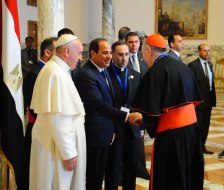 President El-Sisi of Egypt welcomes Pope Francis at the Presidential Palace in Cairo. Here the president welcomes the representatives of the Vatican accompanying the pope to Egypt (Source: Youm7) 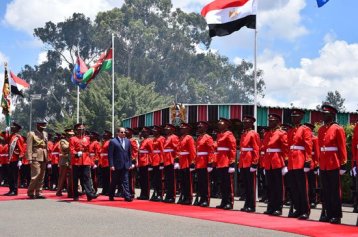 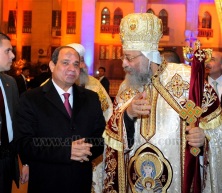 Egyptian Museum in Cairo – The mummies

Egyptian Museum in Cairo – The Pharaohs

📽️🧬🇪🇬 Egypt is a very diverse, dynamic and fast-moving nation which can be seen in its rich history of ancient civilisations and its continuous events and developments in the modern era. It lies right in the middle between Africa, Asia and Europe, surrounded by seas, mountains, and deserts, with its rich fertile Nile flowing in its middle. This allowed for the development of one of the longest running nation in history with all its culture(s) and discoveries … so let’s have a quick tour of its history across the ages! 💓

☀️🌱👑 The start of the Egyptian nation can be traced back to the reign of the Pharaoh Narmer. Narmer (ruler of Upper Egypt in the south, back at the time), more commonly known as MINA in modern-day Egypt (meaning “the one who endures”), unified the Egyptian kingdom (Upper Egypt in the south with Lower Egypt in the north) more than 31 centuries before Christ and became Egypt’s first Pharaoh. He founded the city of Memphis at the mouth of the Nile Delta (now commonly known as the location of the modern city of Giza in the Greater Cairo metropolitan area, near the modern day capital of Egypt: Cairo). His tomb is at the ancient city of Abydos close to the modern day city of Sohag on the river Nile, south of Egypt. The Pharaoh Mina is seen as one of the greatest leaders in the history of Egypt (across all ages) as he founded the Egyptian nation along the river Nile!

🌿📐🔺🤴📜 As Egypt developed centuries later, a great Pharaoh named Zoser came to power at the unified Egyptian kingdom. Egypt was enjoying a lot of stability and prosperity during his reign more than 26 centuries before Christ. He appointed an Egyptian scientist and priest called Imhoteb (a Pharaohnic name meaning “he who comes in peace”) as the Egyptian ancient minister who designed the architecture of the first pyramid in Egypt at the region of Saqqara. He was also appointed as the high priest of Heliopolis close-by. The pyramid was designed to host the tomb of the Phraraoh when he passes away in order to facilitate the Pharaoh’s journey of ascension to the life of eternity with God in the heavens (according to the ancient Egyptian beliefs). He created the layered pyramid of Zoser in Saqqara, which was called mastaba (meaning “house of eternity” in ancient Egyptian … a word still used by modern Egyptians today in their modern Egyptian language, meaning a bench!)  Imhoteb is regarded by many historians as the first genius and polymath in recorded history, author of the earliest advanced texts in medicine, and most famously, a great early architect from the ancient history! His legacy can still be explored today at the Imhoteb museum at Saqqara.

Coming to Today, the Great Archeological Discoveries at the Saqqara Necropolis of the Ancient Civilisation

⚰️🐪⚱️ Just weeks ago, opening up of the ancient coffins of the Egyptian mummies from more than 2500 years were publicly seen by all news reporters covering the new discoveries near Saqqara in Egypt. Egyptian archaeologist & Egyptologist Dr. Mostafa Waziry announced a huge discovery of mummies and tombs at the Saqqara Necropolis under the auspices of the Egyptian minister of antiquities and tourism Dr. Khaled El Enany. This includes a lot of colourful coffins, tombs, ancient statues, and fully retained and intact mummies! This discovery was covered by many of the local and international media like Al-Ahram newspaper Egypt (English article), The National News (English article) and Euronews (English article).  It is an astonishing sight to see the opening of those coffins and revealing the hidden gems and mummies inside them!

🚇🏭🌇🇪🇬 Now, how did we reach the Egyptian republic of today? After the age of the ancient Pharaohs, Egypt went through many kingdoms, dynasties, rulers from different regions of the world (Greek, Persian, Roman, Arab, and European), and was also part of the British empire for some time. All the people in the world are always amazed by this nation and its rich history and strategic location & civilisation.

🔱 In the 19th century, modern Egypt became autonomous from the Ottoman empire and started the modern Egyptian Kingdom established by the Greek-Albanian leader called Mohamed Ali Pasha. He established the modern industry, schools of science, military, and the Egyptian navy. Most Egyptians today see him as one of the greatest leaders in their modern history, and to our day today many of the amazing landmarks developed by him can be seen and visited. This kingdom continued, until finally the Egyptians set a popular revolution against colonialism and the royal house in A.D. 1952, expelling the king from his position and establishing their modern Egyptian republic of today. Currently, Egypt is ruled under a modern democratic constitution (from 2014) with its current president and leader, H.E. Mr. Abdelfattah Alsisi. Egypt and its capital Cairo are developing really quickly with a lot of new places to visit and museums to see (also the The new National Museum of Egyptian Civilization )!

🏛️🖼️🎥 This modern history of Egypt can be seen at the exhibitions of the beautiful modern architecture masterpiece of the new museum of the Revolutionary Command Council that created the modern Egyptian republic.  A video-tour of this museum summarises Egypt’s modern history in just under 13 minutes … from kingdom to republic … with English subtitles.

BONUS: A short 13 Minutes Documentary About Egypt from the Age of the Last Pharaoh Cleopatra to the Modern Day Republic Under the Leadership of President Alsisi

⏳🎞️🏗️🇪🇬 This extra documentary briefly and concisely explains the history of Egypt since the last Pharaoh Cleopatra till the current day Egyptian republic. It goes through all the heroic battles the Egyptians fought to stop invaders and to help preserve prosperity in the world, until we reach the Egyptian revolution of A.D. 2011-2013 and the establishment of the modern-day democratic republic of Egypt under the constitution of 2014 and the democratically elected president Alsisi.