gallery 🇨🇾🇬🇷🔱 Egypt and Cyprus boost military cooperation: a crucial partnership for security in the Mediterranean 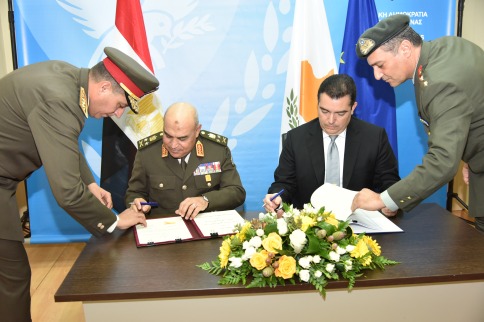 Greek, Egyptian, and Cypriot Ministers of Defense in Nicosia, Cyprus

Bilateral meetings and discussions between the military of Egypt and Cyprus in Nicosia (source: Youm7)

🇪🇺🇬🇷🇨🇾🇪🇬🤝 During December, 2017 the Egyptian government alongside the governments of Cyprus and Greece have signed an important partnership agreement for defense in the Mediterranean. This was achieved during the tripartite visit by the Egyptian minister of defense and his Greek counterpart to the Cypriot capital, Nicosia. This agreement comes in light of the strong and warm bilateral relations (taking place since ancient times) between those nations  in the eastern Mediterranean region, and shapes a crucial partnership for securing the joint investments and projects shared by all three nations.

🔱🌊⚓ The leaders signed a memorandum of understanding and multiple agreements for cooperative defense and joint operations in the Mediterranean. Following this major event, the leaders of the Egyptian armed forces joined their Greek and Cypriot counterparts in field-visits to the infantry, artillery and naval forces of Cyprus to observe their readiness and the advancements in their tactics and equipment. The Egyptian minister of defense, Sedky Sobhi, and the Egyptian diplomatic envoy to Cyprus were also warmly received by the president of Cyprus and the president of the Cypriot parliament during their bilateral meetings for discussing agreements regarding shared political goals and ongoing projects.

📽️ A summary of this visit can be seen in the short video footage below (in the Arabic language):